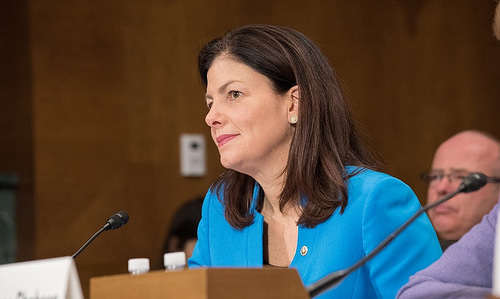 Along with other lawmakers centrally involved in the crafting of the Comprehensive Addiction and Recovery Act, which became law in July, Ayotte received the honor from the Coalition to Stop Opioid Abuse. Susan Awad, of the American Society of Addiction Medicine praised Ayotte for her work.

“The particular role she played, which was so valuable was her perspective as a former prosecutor, one of the first that treats addiction as a chronic disease,” Awad, the organization’s director of advocacy and government relations, told American Pharmacy News.

As a former prosecutor, her championing the idea this was a public health issue, and not primarily about criminal justice, proved to be major help to the bill advancing.

“She never missed an opportunity to champion” this idea, said Awad. “Also, she got down into the details and the particulars of issues, unlike other legislators, which demonstrated to others how important this was, and helped move the bill forward."

Ayotte spoke “very intelligently” about how effective the bill would be,” and how it has hit her home state particularly hard.

Roll out of the bill has been slow, and money is being made available on a piecemeal basis, but, Awad said, once the election is over, it is hoped funding will be made available through the normal appropriations process.
“There are different visions about how it will be funded but it needs to get done,” Awad said.

Ayotte and other lawmakers who drove the bill through Congress were honored in September by the coalition.

"We have to continue to press to make sure that individuals struggling with substance use disorders are supported when they seek out treatment, and part of that work includes removing the stigma associated with addiction,” Ayotte said. “I have made it my priority in the Senate to co-author and get signed into law bipartisan legislation that serves as an evidence-based, comprehensive response to this epidemic, as well as to fight for funding to support these policies."

More than 280 people died after taking fentanyl, which is a synthetic opioid 30 to 50 times more potent than heroin. That is an increase from 17 in 2013. A prescription drug initially designed for those suffering chronic pain such as Stage IV cancer, much of what is now on the streets is produced illicitly, often in Mexico.

Ayotte is arguing for funding under the normal appropriations process to combat the crisis in her state and nationwide. She sent a letter at the beginning of September to appropriators urging them to fund CARA in the continuing resolution and reiterating her support for additional emergency funding, her office said.

The senator, in a tight re-election race against Democratic Gov. Maggie Hassan, also supports a measure from Sen. Jeanne Shaheen (D-NH) that would add $600 million in additional emergency funding on top of the normal appropriations process.