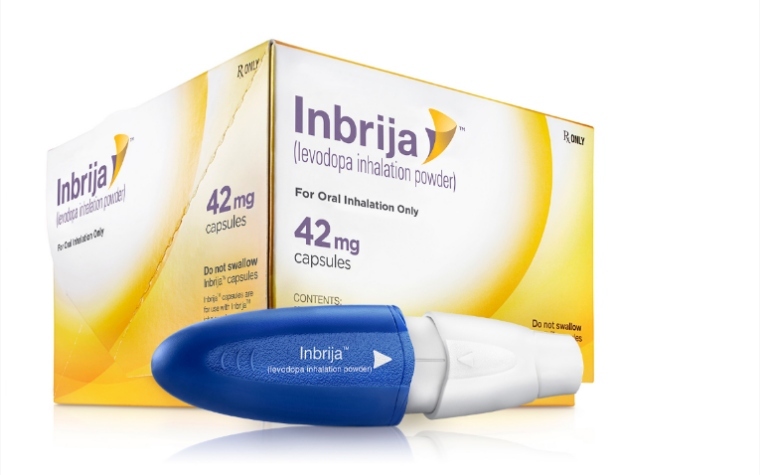 Acorda Therapeutics, Inc. (Nasdaq:ACOR) today announced that the U.S. Food and Drug Administration approved INBRIJA™ for intermittent treatment of OFF episodes in people with Parkinson’s disease treated with carbidopa/levodopa. OFF episodes, also known as OFF periods, are defined as the return of Parkinson’s symptoms that result from low levels of dopamine between doses of oral carbidopa/levodopa, the standard oral baseline Parkinson’s treatment.

“Approval of INBRIJA marks a major milestone for both Acorda and the Parkinson’s community, for whom we are gratified to have developed this much needed therapy,” said Ron Cohen, M.D., Acorda President and CEO. “This milestone resulted from over two decades of research and development, beginning in the laboratory of Dr. Robert Langer at Massachusetts Institute of Technology, through years of enormous perseverance and ingenuity by the entire Acorda team.”

“Despite being on treatment, patients may experience OFF periods as Parkinson’s progresses, which can be disruptive,” said Todd Sherer, Ph.D., CEO, The Michael J. Fox Foundation. “The Foundation provided funding for the early clinical development of INBRIJA because patients told us that OFF periods were one of their most serious issues. We knew we had to help address this unmet need, and this approval is a significant step forward for the community as it provides a new option to manage these gaps in symptom control.”

“In the clinical study program, INBRIJA established its safety profile and demonstrated clinically meaningful improvements in motor function, as measured by the UPDRS Part III,” said Robert A. Hauser, M.D., MBA, Professor of Neurology and Director of the Parkinson's Disease and Movement Disorders Center at the University of South Florida. “INBRIJA helps address a significant unmet need for people with Parkinson’s, and we look forward to adding this new treatment option to our armamentarium.”

FDA approval of INBRIJA was based on a clinical program that included approximately 900 people with Parkinson’s on a carbidopa/levodopa regimen experiencing OFF periods. INBRIJA is not to be used by patients who take or have taken a nonselective monoamine oxidase inhibitor such as phenelzine or tranylcypromine within the last two weeks.

“I’m delighted that INBRIJA has been approved and may be added to patients’ existing Parkinson’s medications for on-demand use, based on individual patient need,” said Burkhard Blank, M.D., Chief Medical Officer of Acorda. “We thank the FDA for a constructive dialogue throughout the development program and their partnership during the review cycle. We especially thank all those who volunteered for the INBRIJA clinical trials, without whose commitment new medications could not be developed. And we are grateful for the people living with Parkinson’s, their care partners, researchers, clinicians and advocacy groups, who have all collaborated with us to help achieve this milestone.”

The Phase 3 pivotal efficacy trial – SPANSM-PD – was a 12-week, randomized, placebo controlled, double blind study evaluating the effectiveness of INBRIJA in patients with mild to moderate Parkinson’s experiencing OFF periods.

The SPAN-PD trial met its primary endpoint, with patients showing a statistically significant improvement in motor function at the Week 12 visit, as measured by a reduction in Unified Parkinson’s Disease Rating Scale (UPDRS) Part III score for INBRIJA 84 mg (n=114) compared to placebo (n=112) at 30 minutes post-dose (-9.83 points and -5.91 points respectively; p=0.009). Onset of action was seen as early as 10 minutes.

INBRIJA was also studied in a Phase 3 long-term, active-controlled, randomized, open-label study (N=398) assessing safety and tolerability over one year. This study showed the average reduction in FEV1 (forced expiratory volume in 1 second) from baseline was the same (-0.1 L) for the INBRIJA and observational cohorts. Patients with chronic obstructive pulmonary disease (COPD), asthma, or other chronic respiratory disease within the last five years were excluded from this study.

INBRIJA is expected to be commercially available by prescription in the U.S. in the first quarter of 2019 and will be distributed through a network of specialty pharmacies.

Before using INBRIJA, patients should tell their healthcare provider about all their medical conditions, including:

Patients should tell their healthcare provider if they take:

INBRIJA is for oral inhalation only. INBRIJA capsules are not to be swallowed or opened.

Patients are not to drive, operate machinery, or do other activities until they know how INBRIJA affects them. Sleepiness and falling asleep suddenly can happen as late as a year after treatment is started.

INBRIJA (levodopa inhalation powder) can cause serious side effects including the following. Patients should tell their healthcare provider if they experience them:

The most common side effects of INBRIJA include cough, upper respiratory tract infection, nausea, and change in the color of saliva or spit.

INBRIJA is the first and only inhaled levodopa for intermittent treatment of OFF episodes in patients with Parkinson’s disease treated with carbidopa/levodopa. INBRIJA utilizes Acorda’sinnovative ARCUS® platform for inhaled therapeutics. A Marketing Authorization Application (MAA) for INBRIJA was submitted to the European Medicines Agency (EMA) in March 2018 and was formally validated in May 2018.

About Parkinson’s and OFF Periods

Parkinson’s is a progressive neurodegenerative disorder resulting from the gradual loss of certain neurons in the brain. These neurons are responsible for producing dopamine and that loss causes a range of symptoms including impaired movement, muscle stiffness and tremors. As Parkinson’s progresses, people are likely to experience OFF periods, which are characterized by the return of Parkinson’s symptoms, which can occur despite underlying baseline therapy. Approximately one million people in the U.S. and 1.2 million Europeans are diagnosed with Parkinson’s; it is estimated that approximately 40 percent of people with Parkinson’s in the U.S. experience OFF periods.

The ARCUS Technology Platform allows systemic delivery of medication through inhalation, by transforming molecules into a light, porous dry powder. This allows delivery of substantially higher doses of medication than can be delivered via conventional dry powder technologies. ARCUS has the potential to be used in the development of a variety of inhaled medicines. Acorda acquired the ARCUS technology platform as part of the acquisition of Civitas Therapeutics in 2014.